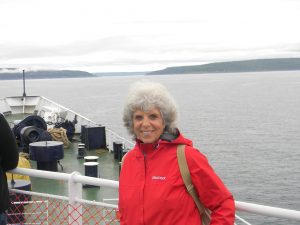 Susan A. Katz is a nationally recognized poet and teacher.  She has embraced an educational philosophy that endorses her belief that language is the key to all learning and has conducted student and adult workshops for the better part of 30 years.  Her passionate belief that arts be integrated into school curriculum has flavored the tone and focus of her extensive workshops in the United States and Canada.

Susan has read her poetry at various venues, including: Rockland Community College (SUNY) Visiting Writers Series, Donnell Library Center, and the Rockland Center for the Arts, and at numerous Colleges, Universities, and libraries in the United States and Canada.  Her poetry has received numerous accolades from poets and editors.

“Her poems reflect a sense of clarity and music…meditative and lyrical…exhibiting a strong sense of wistfulness and loss.”  – Colette Inez, Poet

“Susan is a lyrical poet of significant substance.  She has provided a provocative exploration into virtually all nuances of family life and death…in an indelibly human work of art.”  – Dr. Phillip Shrew, Poetry Review Editor, The Cathartic

“Susan A. Katz is a God-blessed poet.  She does not sing in chorus.”  – Menke Katz, Poet/Editor/Professor/Philosopher

Susan A. Katz has been actively writing and publishing poetry for over 50 years.  She finds inspiration for her poems in the everyday business of living, of family joys and sorrows, and in the vast and inspirational landscape of the natural world.  Her poems reveal her intense passion for the living quality of language and care deeply about the words and rhythms that capture the beauty and deliver the impact of imagery.

Distance separates us from ourselves
and one another; divide a space in half
and half remains, we come
together but we never
touch, imagination fuels
our passions and incites
our fantasies to bridge
the gap.

We meet halfway
to nowhere, like a dream begun,
unfinished by our waking, our hands
hold air, our fingers feel
what isn’t there.

What’s real is what we think
is real and if space halves
itself then so must time and death’s
preposterous since nothing stops
and nothing starts and if
we cannot meet
we cannot part.